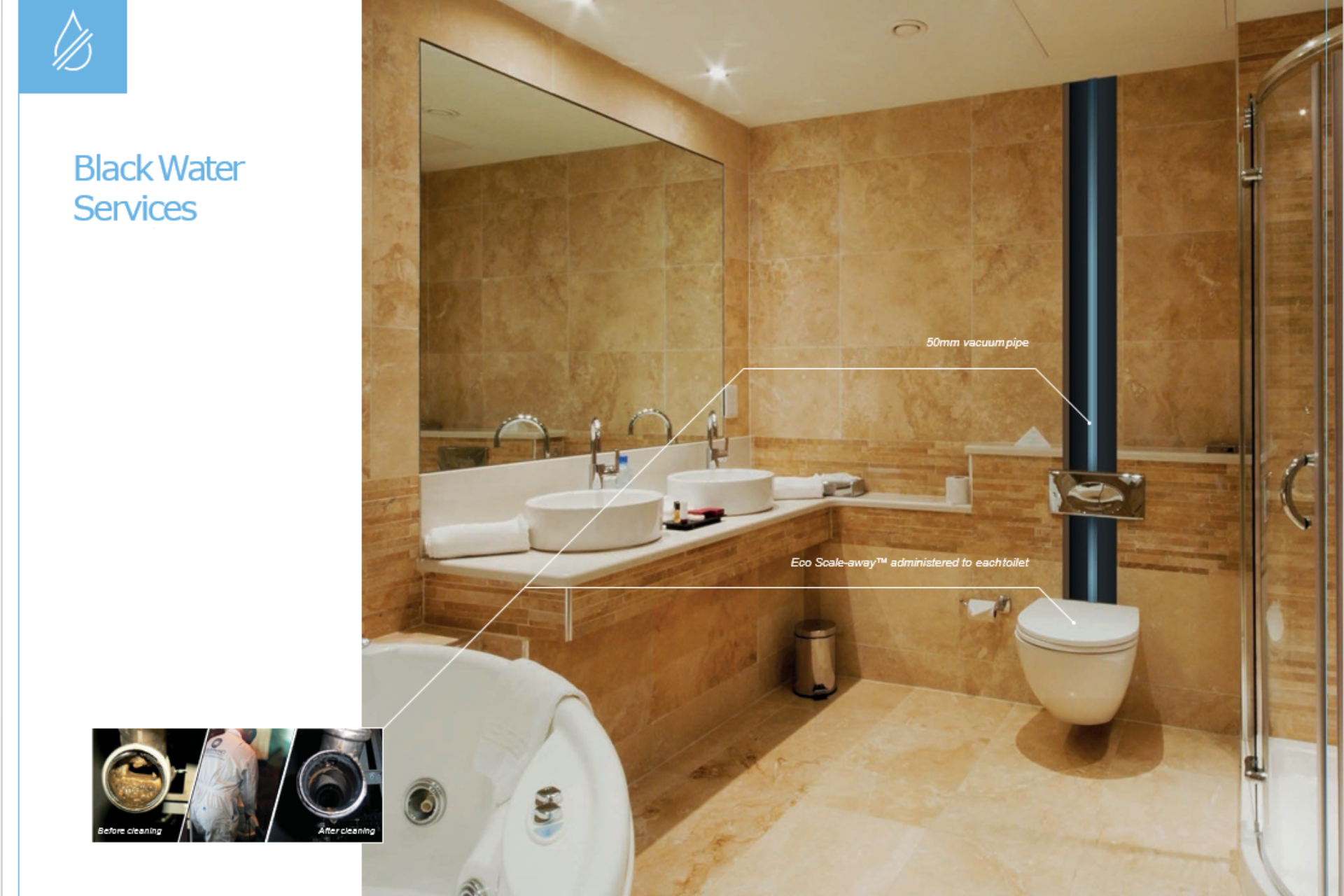 As they accumulate over time, the scaling drastically reduces the diameter of the pipelines to the point of causing them to become completely blocked.

Thus, causing serious inconvenience and significant expenses for the replacement of the pipes, with implications to cause interruption of operations.

The scaling is the result of the deposition of Struvite, a phosphate hydrate of ammonium and magnesium that covers the internal surface of the pipes, in the form of "needle" crystals, favors the consequent deposition of Calcium and Magnesium that are dissolved in the water.

The traditional removal systems involve the use of highly corrosive products, dangerous for humans and harmful for treatment systems, which need to be isolated for the entire time of service.

1. Grey Water Services: The accumulation of organic and soapy residues in grey water collection lines promotes the proliferation of bacteria, pathogens, fungi and algae which also give rise to unpleasant odors.

Eco Drain-away is a non-corrosive product that causes rapid decomposition of any organic residue.

Eco Drain-away can be used on any gravity grey water system, such as showers, sinks and on kitchen drains, preventing health hazards and potential interruption of system operation.

Thanks to the partnership between Clearvac Italia, Kimi control and Chimica Novelli, a new product has been developed that is capable of eliminating in a totally natural way, the unpleasant odors coming out of shower trap drains caused by the accumulation of debris in the grey water tanks. ECO-ODOR AWAY is a compound of over 80 different strains of effective microorganisms.

Effective microorganisms are ecological products and technologies that create within the grey water system a prevalence of specific combinations of microorganisms:

- yeasts such as Saccharomyces cerevisiae

- other numerous yeasts and bacteria tive microorganisms was developed by Japanese microbiologist Teruo Higa, professor at Ryukyus University in Okinawa(Japan), who analyzed the behavior of various combinations of microorganisms and discovered the "principle of prevalence".

Based on this concept, ECO-ODOR AWAY, dosed in the right quantities is able to remove almost instantly the bad odors coming from the pipes and, through a periodic use, ensures the maintenance of the system in optimal conditions.

The Clearvac method of de-scaling: Applying a unique, non-hazardous product paired with a specific non-intrusive procedure (determined by the Clearvac team specified by vessel size, time scale and job scope), Clearvac service will effectively remove all hard scale deposits and return pipework back to new condition. The service will not affect business or sailing conditions and the vacuum system will be fully operational meaning no disruption to passengers or crew.